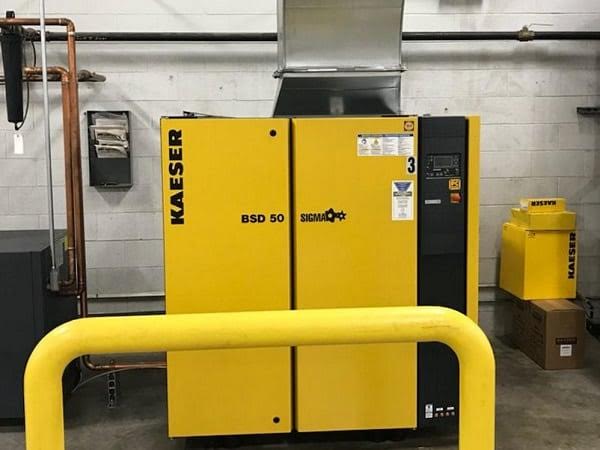 Which is divided into:
Stationary compressors: It is the largest compressor size and is designed to be placed in companies and factories and has powerful motors and large storage tanks that ensure the compressor is running for a long term without interruption.
Portable compressors: They are types of compressors with small air tanks, but it is not difficult to move the wheels of the compressor, deal with them, and move them to anywhere easily. This type is considered the most used type and there are different types of compressors.

Kinematic compressors
It consists of a rotating disk that enters the air parallel to the axis of rotation and exits it vertically, and through the rotation the device increases the speed of the gas and the pressure increases, and then works to convert the force of the gas pressure into a kinetic force in which the gas is rushed, and it is used when needed for a continuous force such as oil purification operations In petrochemical plants, the pressure released by this type of compressor can be doubled, reaching more than 69,000 Pa.

Axial compressors
In this type of compressors there is a fan that rotates around an axis, the purpose of which is to increase the velocity of the gas entering the pump and move it away from the center to reach the dispersant. These types of compressors are very expensive. Because it contains many parts and the spaces between them are calculated with high accuracy and are made of high quality materials.

Positive displacement compressors
This type of compressor contains a piston, which may be a single-cylinder or multi-cylinder compressor in a more complex sense, and it works in one or several stages, the motive power of it either originates from an electric motor or an internal combustion engine, which works This type of compressor with the principle of piston movement upward pushes the air in and its movement in the other direction works to pressure the air to a certain degree, which leads to the opening of the push valve and the air to come out forcefully.

Rotary compressor
A compressor that contains an eccentric spindle that has moving blades that compress the gas inside it due to its movement, and there are types of them: Scroll compressors, Rotary screw compressors.